I remember the first time I heard of Fort Jesus, it was on the Kazuri Bead Factory tour with my mom here in Nairobi.

But it wasn’t until my most recent trip to the coast that I had a chance to visit this legendary fort. I laugh checking the Wikipedia page for Fort Jesus because, despite having been in this fort and having had a tour guide, my takeaway messages were…slightly off.

Like most things in Kenya, you’re not really doing it for cultural edification but for an experience, and that it was!

Fort Jesus was built by the Portuguese, and stands now as a remnant of colonialism by not only one group. From the rudimentary history lesson I got from my tour guide, it was sort of like Poland in the 20th century, constantly being invaded by one group of colonialists or another, which doesn’t really speak volumes for its ability to deter invaders, come to think of it.

A key feature is that Fort Jesus is shaped like a person. And, if you take the photo literally and count the church structure at the bottom, it’s shaped like a dude. Our tour guide was really keen to point this out.

And, in the same theme, we also got a demonstration of many of the various Portuguese toilet facilities, built right into the fort!

Our guide was perhaps not the best informed, but he was incredibly enthusiastic.  “Come and see, come and see!” he kept insisting.  There was a lot to see!  The fort reminded me a lot of visiting the Tower of London, and it was fascinating to see the various eras of building as each conquest brought in a new collection of masons/needs.

The views were also incredibly beautiful, as Mombasa, a coastal down, is very lush and green and tropical.

Fort Jesus also has some heavily religious influences, as, despite its name, it has served as a bastion of both the Christian and Muslim faith. It’s something special to see in the details of things like door carvings especially. 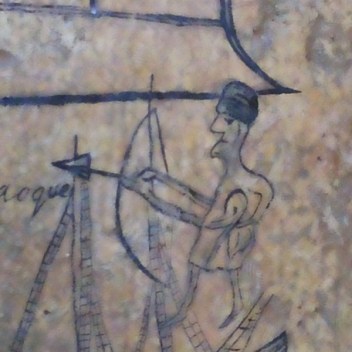 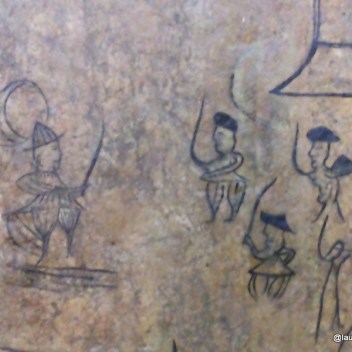 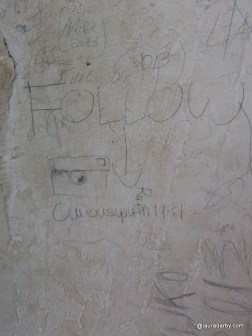 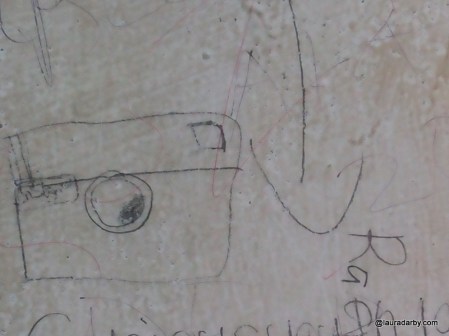 The heat got so intense that we may have lingered in the museum despite the constant cries to “Come and see” other things.  The museum was pretty special, though. I’ve found after spending time in primarily-port cities like Dubai and Mombasa that places with long histories of trade end up keeping the best global histories. The museum was full of things from all over the world and a huge range of time periods.

After the hilarity of our tour guide, we were also glad to have plaques to read with potentially-more-accurate information on them.

Though some of his faux-pas were pretty hilarious. Dates he gave us were somewhat arbitrary and very clearly made up on the spot.  Not only did the British invade Fort Jesus “in 1898 to do slavery” but the 3 foot tall door on this cistern was clear indication that, to his mind, Portuguese explorers were hobbits.

Proof that the Portuguese were only 3 feet tall?

It was, all in all, a really enjoyable 2 hours.  If you like history, or architecture, or hobbits, you’ll probably enjoy it too.

And if you have any suggestions on how to prevent corruption at Fort Jesus, please insert them into this very official-looking box.

Postscript: as a funny sidenote, my friend ran an RPG set in Mombasa and used Fort Jesus as a vampire nesting ground. When I mentioned this fact to friends in the taxi, the taxi driver may have misunderstood and is now anticipating a vampire invasion with fear and dread, if his questions are any indication.